Odisha E-Vehicle Policy 2021: Solar PV-EV Synergy Can Be The Next Big Thing For This Green Push

Home - Blog - Odisha E-Vehicle Policy 2021: Solar PV-EV Synergy Can Be The Next Big Thing For This Green Push 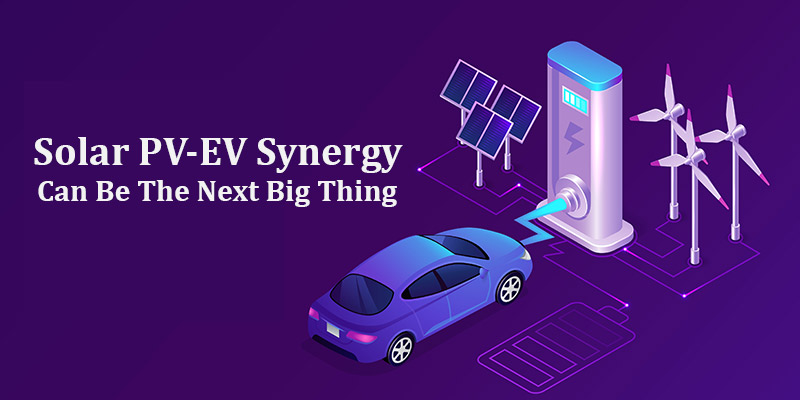 Odisha E-Vehicle Policy 2021: Solar PV-EV Synergy Can Be The Next Big Thing For This Green Push

With Odisha government’s latest move to usher in electric mobility in the transport sector of the State, enthusiasm seemed to be building around the industry.

Even though experts’ takeaways from the promising move has hardly moved any smiles because Odisha despite being the 10th state in giving a nod to the cleaner alternative to fossil fuel, its electric mobility presence on-road is a mere 0.06 per cent.

As per a Niti Ayog report, the State has only around 4.8K Electric Vehicles (EVs) to a meager 18 charging stations.

Also Read: Why Should You Adopt Solar Power System For Your Home?

The EV Policy announced by the authorities has some promising highlights though like waiver to road taxes, registration fees during policy period, financial incentives to buyers, manufacturers under Start-up policy, subvention of loans, focus on Research and Development in the sector etc.

Thinkers believe Odisha however has a long way to go by looking at the comparative analysis of the EV policy in other states like Dehi, Karnataka, Andhra Pradesh and UP where there has been an upscale in expansion of an EV ecosystem with strong supply side incentives such as capital investment subsidy, funding for research and tech in electric vehicles, charging stations, software & cloud services.

While Odisha government has announced 15 percent subsidies on each purchase of EVs and maximum amount of subsidy up to Rs 50000 for four wheelers, other state EV policy like in Maharashtra, Gujrat and Delhi, has assured subsidy more than 1 lakh rupees on Electric Cars.

Odisha’s EV policy has also no clarity in terms of subsidy based on battery pack as well. For example, for an e-bike, the battery pack is 3kWh, and the best EV policy adopted state Maharashtra has announced subsidy of Rs 10000. Similarly, battery pack should be 30 kWh for four wheelers which makes up to Rs 150000 with Rs 5000 per kWh. But Odisha comes far behind in the scale.

But subsidies alone won’t work like a magic pill at all. In fact, they take away the customer’s freedom of choice and destroy innovation.

What happen most often is that, lobbies work more to tilt policy in ways to promote their own products, and throw out competitors’ stuff so basically it promotes manipulation and not business. So it goes.. SAY NO TO SUBSIDIES.

Looking at other aspects, beyond the fiscal incentives, several regulatory reforms like open permit system, provisions for reserved parking for EVs, setting up huge charging infra, putting EVs in lowest slab of GST, guidelines for safety and security will make the electric mobility drive in Odisha a good starter in the long run and ensure success in the State’s EV policy objective of running 20% electric vehicles on road by 2025.

India as a whole targets to have 100% electrified vehicles on road and the goal undoubtedly is much welcoming because a number of major India cities have earned the infamy of getting into the list of world’s most polluted cities.

However, we must be well aware that adoption of EVs will increase overall demand for electricity and require major upgradation in power generation, distribution and transmission infra.

So in order to make EVs a green revolution in true perspective, this source of power should not come from non-renewable sources and process like from thermal power plants, but rather increase in integration of renewable energy and EV adoption should go hand in hand.

Now coming to one of the most vital aspect in backdrop of this EV scenario, we see that our 2/3rd of electricity is generated from thermal plants and EVs nowadays are more polluting the environment than the equivalent fuel-run vehicles as the generating plants emit more CO2 and greenhouse gases. 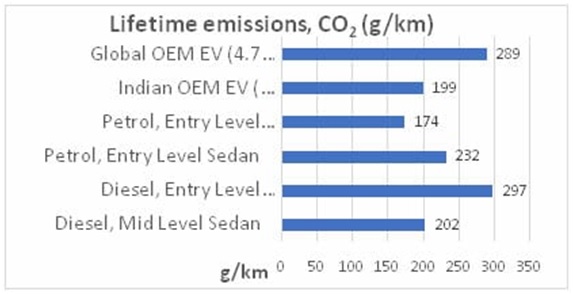 So use of renewable energy like Solar will make EVs greener and viable economically. This is because tapping the abundant solar energy and applying it as a power source for electric automobiles has become a necessity rather than an option.

Here’s a graphical representation of global solar vehicle market by region. As expected Asia Pacific which includes India is estimated to be the largest market for solar-electric vehicles by 2030. 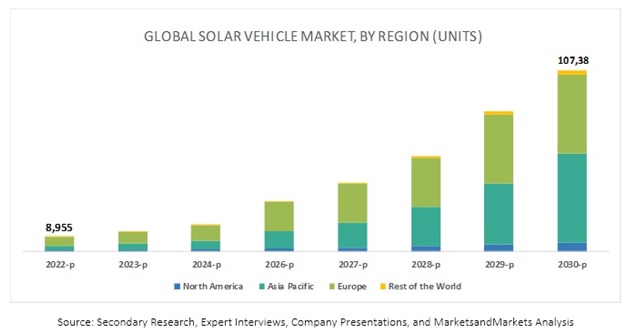 Solar power, as the best renewable source of energy, has proved time and again how effective it can be when harnessed for power generation in both as a standalone system or in supplement with the grid.

In Odisha, while EVs are at a much nascent stage, adoption of solar energy has gathered pace due to market leaders like WhiteShark. It is a perfect time when this synergy of solar and electric power should play as the game changer in the EV sector.

Solar energy can be harnessed to power electric vehicles in a number of ways. In not too distant period, this Photovaltic – Electric Vehicles (PV-EV) synergy or simply known as Solar Powered EV Charging might emerge as the Next Big Thing!

For this to happen, people need a fundamental change in how they think about refueling motor vehicles in the most renewable way. The most important aspect of this revolution will be that Electric vehicles will gradually reshape the automobile industry.

In the times to come, we expect nearly all who owns a solar energy system to install a solar charging station at home. But for this to happen we’ll need a fundamental change in how we think about evolution of our energy infrastructure.

The combination of solar energy and electric vehicle (EV) charging is the key to drastically reduce our dependence on fossil fuels and instead steer the revolution in residential solar usages.

Here we take a look at some of the key aspects of this PV-EV synergy.

What does a modular solar powered EV charging station look like?

A model solar power EV charging station has components for harnessing & storing energy, power management, connectivity, functionalities like platform for user interaction like payment for charging, information exchange and diagnostics in case of any malfunctions.

Types of Solar charging of EVs

On-Grid Solar Charging Station: The most direct energy system to charge EVs, a grid-tied solar power generation facility will not only help you charge your loved cars and bikes but also can feed energy to the grid, even if your home needs it at the moment or not.

So when you are working in your office, your solar system is earning you bucks by feeding power to the grid. When you return, you can use your credit to re-charge you vehicle.

Generally, a conventional EV charger connected to grid “will mostly always be cheaper” than Off-Grid charger which stores power in batteries.

Off-Grid Solar Charging Station: In this case, one can use solar system to feed the battery energy storage which will meet all the energy requirements for charging the vehicles and also other power needs be it residential or commercial purposes.

A home owner can leave his vehicle fully charge with the power generated by the independent solar panel array during the day without having any connection with local electrical utilities.

Benefits of Solar Powered Charging Stations for vehicles are aplenty and that is why authorities are scampering to tap into vast potential of this PV-EV synergy.

Here Are Some Of Its Tangible Benefits:

Around 80% of a solar panel module is recyclable using advanced reprocess techniques which is a much significant fact in itself considering the importance being laid on salvaging the environment from destruction.

As against the conventional batteries and inverters, average lifespan of a solar panel today, is more than the 20 years.

With new technological advancement, solar energy is charting new records in power generation and capacity which is more promising.

Solar is the cleanest option for fueling electric vehicles.

Solar panels can help significantly save electricity costs at home.

Cost of solar installations has reduced considerably over time, which is more encouraging for people to invest in it.

Solar charging stations can really work wonders in far-off locations where installing grid is a herculean task. They can also work as an add-on for the grid in pulling up the charging requirements.

The main role of the solar systems in the picture of the EV space will be its one-time installation and capital expense, which in almost all cases work for at least 20-25 years. In turn, the return on investment, is easily taken care of in a few years.

What Now For Odisha?

It remains to be seen how Odisha government’s ambitious push for electric mobility spans out in a few years time, but it is for sure that solar sector will have a huge role to play in securing the future of the industry once and for all. So a comprehensive approach towards bringing in solar sector in sync with the EV industry is the need of the hour.